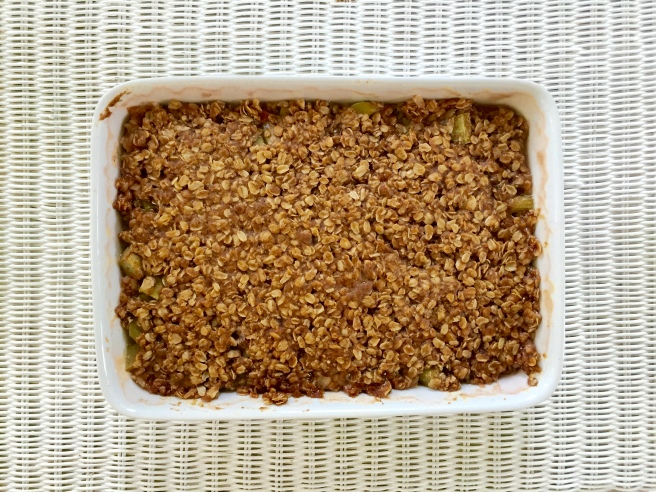 Rhubarb has an identity crisis. Botanically it is a vegetable, however most people think of it as fruit. Even the United States government defines it as a fruit following a 1947 customs court ruling. Regardless, I enjoy it’s tangy, mouth puckering goodness. 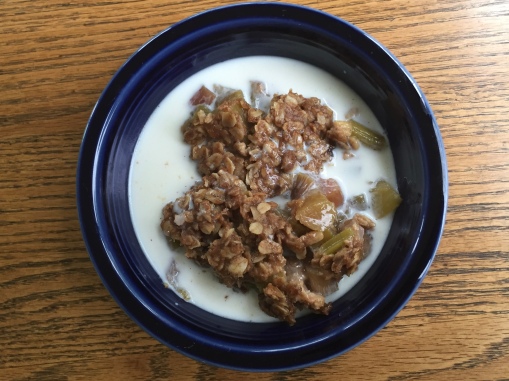 One of my favorite ways to enjoy rhubarb is baked in a crisp. My mother would make them frequently in the spring.

There is nothing better than a slightly warm serving of rhubarb crisp topped off with some fresh heavy cream. My mother grew up on a farm with dairy cows and I was often reminded of her having to milk thirty-five of them twice a day by hand.

I made a rhubarb crisp today and thought of my mother and those thirty-five milk cows.

Here is what I did:

In a large bowl, combine sugar and cornstarch. Add rhubarb and toss to coat. Spoon into a 12″ x 9″ baking pan.

In a small bowl, combine the oats, brown sugar, butter, flour and cinnamon until well mixed.

Spread over rhubarb. Bake at 350° for 50 – 55 minutes or until bubbly and fruit is tender. Let cool, but best served when still slightly warm.